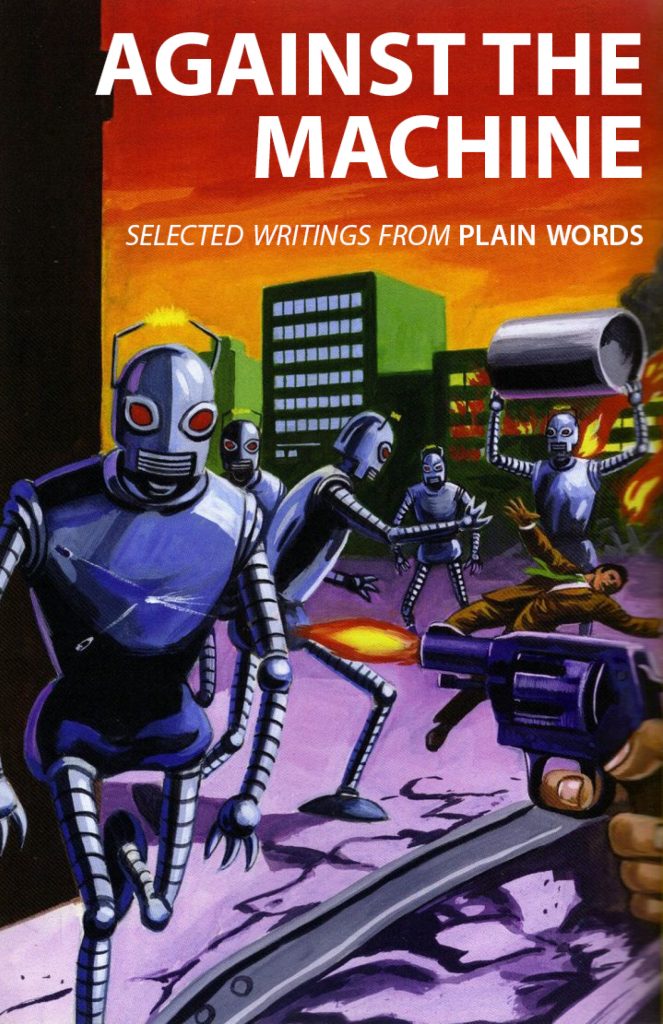 Bloomington is increasingly becoming a place meant for rich and middle class people. In order for that to happen, the city government is cracking down on the presence of poor people in downtown, while real estate developers are building luxury and market-rate housing developments that drive up rent across the city. Cops, cameras, and condominiums complement each other in guiding the city towards becoming a place inhospitable to poor or uncontrollable people. END_OF_DOCUMENT_TOKEN_TO_BE_REPLACED 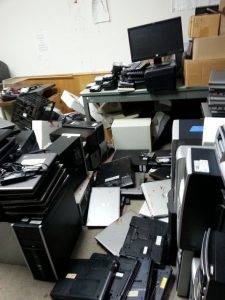 A disoriented 250-pound deer broke through two glass doors at an east-side computer store, thrashed — bleeding — through the business and flung a police officer over its back with its antlers before being tranquilized.

Indianapolis Metropolitan Police Department described the buck as “going berserk” and “terrorizing employees” before Animal Care and Control officers could subdue it. END_OF_DOCUMENT_TOKEN_TO_BE_REPLACED

Louis Lingg was born on September 9, 1864 in Mannheim, Germany. Early in his life, he began working as a carpenter, eventually involving himself in revolutionary struggles. His politicization compelled him to evade military service, so he fled Germany for Switzerland, only to be expelled in 1885. That summer, Lingg immigrated to the United States, settling in Chicago, one of the epicenters of the vibrant German-American anarchist movement.

On May 3, 1886, police attacked a strike at the McCormick Harvesting Machine Company plant, killing two workers. The following day, during a rally against this brutal repression, police attacked demonstrators. In the melee that followed, an unidentified person threw a bomb into the crowd of police, killing seven of them and injuring many others. At least four other people were killed in the ensuing firefight between police and demonstrators.

In response, police, with little evidence, began rounding up anarchists who they claimed played a part in the bombing. Eight prominent anarchists – among them organizers, orators, and editors of popular anarchist newspapers – were sought by police: August Spies, Samuel Fielden, Adolph Fischer, Albert Parsons, Michael Schwab, George Engel, Oscar Neebe, and Louis Lingg. Initially evading capture, Lingg was discovered in hiding on May 14. Not one for willing submission to the state, Lingg fought the two police who tried to arrest him – first with a gun, then with fists.

While Lingg was not present at the Haymarket the day of the bombing, the state’s dogs claimed he was involved in making the bomb. Though no evidence links him to the bomb thrower – whose identity remains a mystery to this day – Lingg was a prolific producer of bombs and an intransigent enemy of authority. In a search of Lingg’s apartment, investigators discovered two spherical and four pipe bombs.

After a notoriously prejudiced trial, the judge sentenced seven of the Haymarket defendants to death by hanging and Oscar Neebe to 15 years in prison. At his sentencing, Lingg remained defiant, proclaiming “I die happy on the gallows, so confident am I that the hundreds and thousands to whom I have spoken will remember my words. When you shall have hanged us, then they will do the bombthrowing! In this hope do I say to you, I despise you, I despise your order, your laws, your force propped authority. Hang me for it.”

On November 10, 1887, the day before their execution date, the Governor of Illinois commuted Samuel Fielden’s and Michael Schwab’s sentences to life in prison (Fielden, Schwab, and Neebe would all be released six years later after being pardoned by Governor John Altgeld). Albert Parsons, August Spies, George Engel, and Adolph Fischer were murdered by the state on November 11, 1887.

Louis Lingg chose a different response to his impending execution. Days after four bombs were discovered in his cell, Lingg placed a lit blasting cap in his mouth, blowing off his lower jaw. Before the guards could enter his cell, he scrawled “Hoch die anarchie!” (“Hurrah for anarchy!”) on the prison cell stones in his own blood. Lingg died six hours later, refusing with his own suicide state authority’s control over his life. 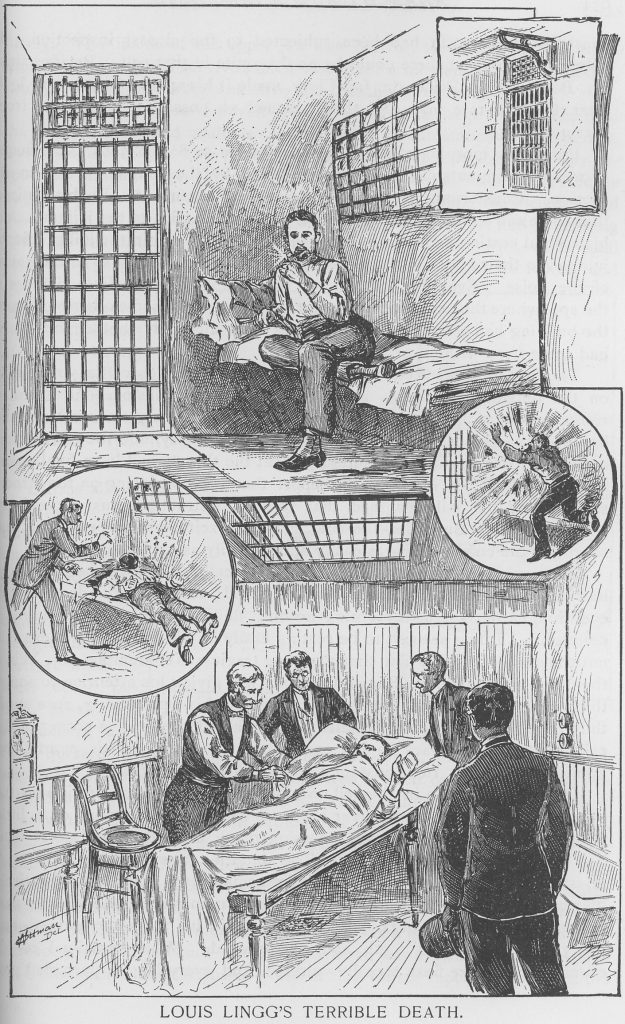 For more information on Louis Lingg and the Haymarket, read Paul Avrich’s exhaustive and engaging book The Haymarket Tragedy.

To honor Louis Lingg’s rebellious life, we present an unpublished poem he wrote in 1886, discovered in the Labadie Collection.

TO A TRODDEN PANSY
A broken stem, a pansy blossom crushed
In dirt, yet naught in all of Nature’s store
Revels in scorn at what we all deplore
In it. Wert thou where careless footsteps rushed?
‘Neath wanton lust wert thy fair petals brushed
E’en when thou smiled thy loveliest, before
Dark destiny had rolled its shadow o’er,
Ere yet thy innocence for cause had blushed?
Canst we read naught not writ in Custom’s scroll?
Living and human, cast in a finer mold,
E’en while we mouthing boast a ‘deathless soul,’
Yet still more wise than Nature, far more bold—
Regarding what in Nature is no loss
E’en while Hope’s brightest mintage we call dross! 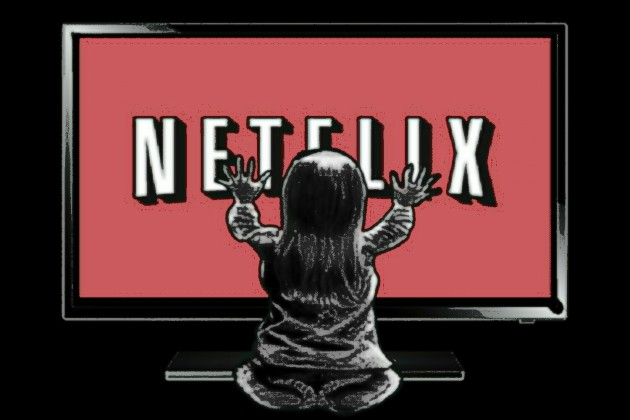 “Become ungovernable” is a slogan anarchists like to use these days. It sounds cool and fits the anarchist aesthetic of revolt and spectacular conflict. It doesn’t immediately mean much, but that’s the beauty of it, the meaning shifts with each person and the specificities of their lives. With no revolution and lots of environmental catastrophe, state violence, and “active shooter situations” on the horizon, rather than despairing at our no-future future, it instead contains a path forward: to refuse submission to law, duty, and passivity in daily life. END_OF_DOCUMENT_TOKEN_TO_BE_REPLACED 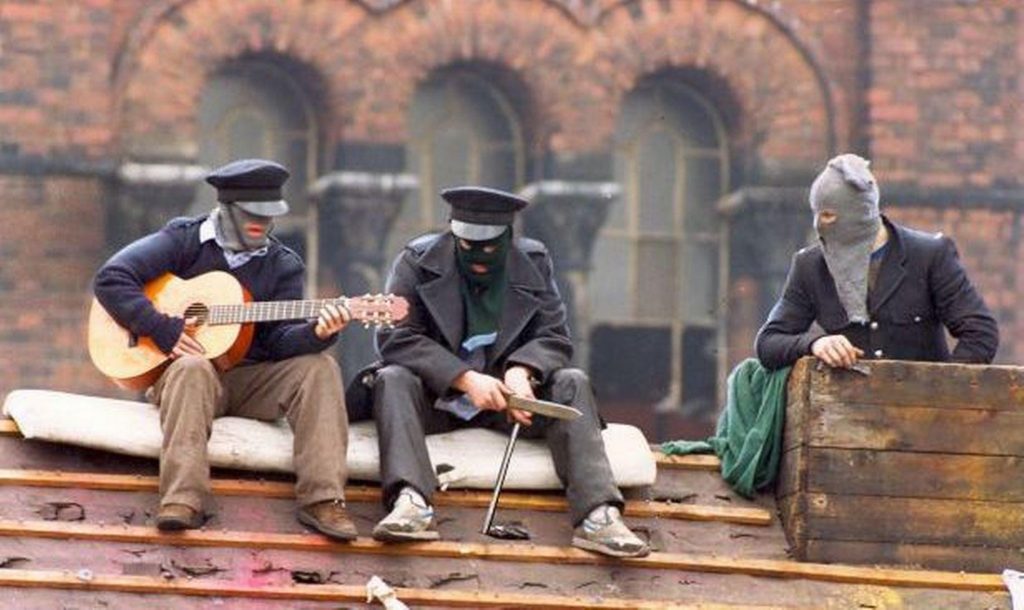 Since October 2015, Bloomington Anarchist Black Cross has been providing consistent  monthly funds to anarchist prisoners throughout the United States via our Anarchist Prisoner War Fund. We are now asking for help keeping this project going strong into the future.

We have specifically chosen comrades who were receiving very little money or support from the outside, who have no familial support, or who were otherwise in need of monetary aid. These funds have been essential when some comrades did stints in solitary due to activities surrounding the September 9th prison strike, aiding their survival in the most oppressive conditions. We also emphasize support for rebellious prisoners who have maintained the struggle behind the walls. We want to make it clear to our comrades in prison and those taking action on the outside that they can continue to struggle without fear of abandonment if they are caught.

Currently, we provide $40 each month to five anarchist prisoners:

Thus far, we have raised this ourselves through fundraising, exclusively through the support of local friends and comrades. This constant need for funds means our other efforts (two prison zine distros, a monthly anti-prison info night, letter writing events, a widely-distributed prison newsletter, correspondence and visits with our imprisoned comrades, sending monthly packages of zines and books to anarchist prisoners, maintaining anarchist infrastructure in Bloomington, etc) sometimes have to take a backseat. We live in a small town, and the pool of people willing to give money to anarchist prisoners isn’t large. In an effort to alleviate this, we’re asking people elsewhere to help us keep the War Fund going.

All money sent to us will go directly to imprisoned comrades:  consistently to those on our list, and periodically to others who need it.

If we can meet our goal, we will begin sending consistent funds to additional imprisoned comrades.

We thank anyone who donates, and we carry forth the promise of expanding and deepening our efforts to set our comrades free and destroy the  prison society that keeps us all confined. 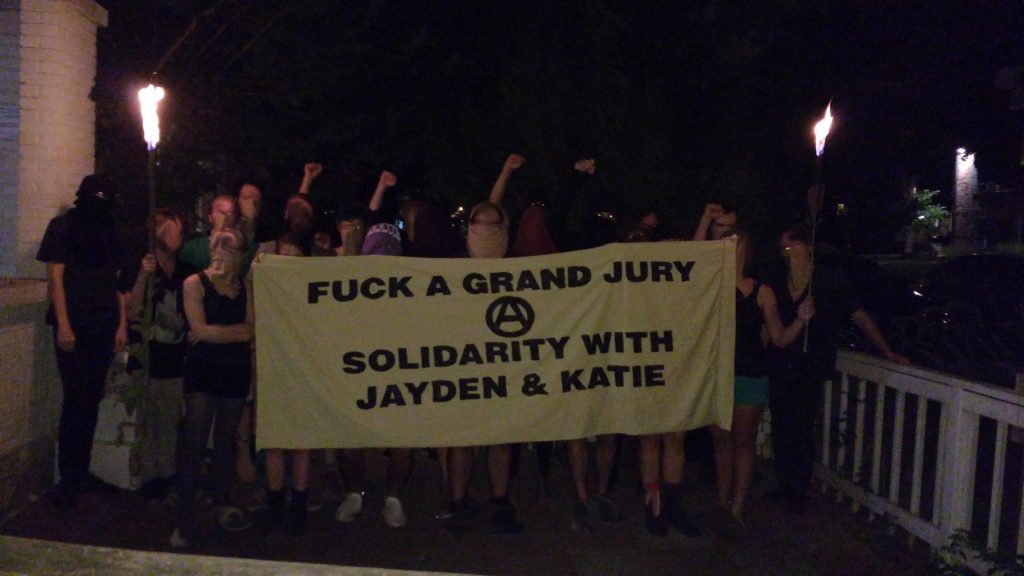 Grand Juries are an investigative tool often used by the state against people engaged in liberatory struggles. Towards the ultimate goal of securing indictments, they compel testimony (ie snitching), under threat of imprisonment. It is illegal to refuse to cooperate with a Grand Jury, and penalties range from empty threats to months or years in prison. In this way grand juries can be massively disruptive to organizing efforts and ongoing struggles even before a single indictment has come down. There is a long history of refusing to testify to grand juries (and an equally long history of those who don’t refuse to testify getting, at minimum, expelled from radical communities, projects, and spaces). END_OF_DOCUMENT_TOKEN_TO_BE_REPLACED 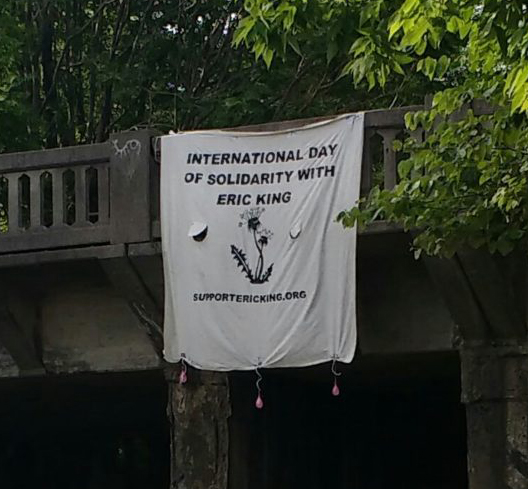 In September 2014, Eric King was arrested after attempting to firebomb a congressman’s office in Kansas City, Missouri in solidarity with the Ferguson uprising. Openly defiant in court, Eric proudly stood by his action and proclaimed his commitment to the struggle against white supremacy, patriarchy, and the state. Sentenced to 10 years in prison, Eric has faced repeated threats and repression from prison administration and guards – always responding with the same rebellious spirit and mocking contempt for this world of laws and cages. END_OF_DOCUMENT_TOKEN_TO_BE_REPLACED 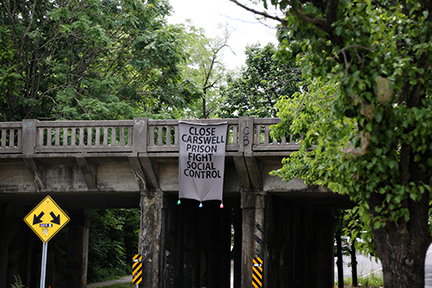 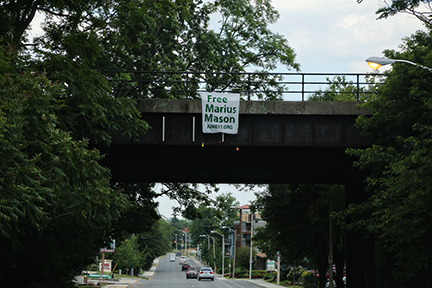 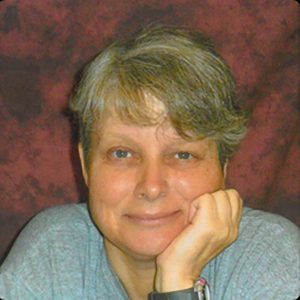 June 11th is the International Day of Solidarity with Marius Mason & All Long-Term Anarchist Prisoners. The anarchist project contains a combative hostility towards all authority and domination, and strives for nothing less than total liberation. That our enemies investigate, capture, and imprison some of us as a result of our struggles is a simple reality that we should accept as inevitable. Taking time to remember, celebrate, support, and act in solidarity with our comrades who have been captured by the state is necessary not only for them, it is a crucial component for us fighting outside the prison walls to know that if we go down, we will not be left to face the hell of prison alone. END_OF_DOCUMENT_TOKEN_TO_BE_REPLACED