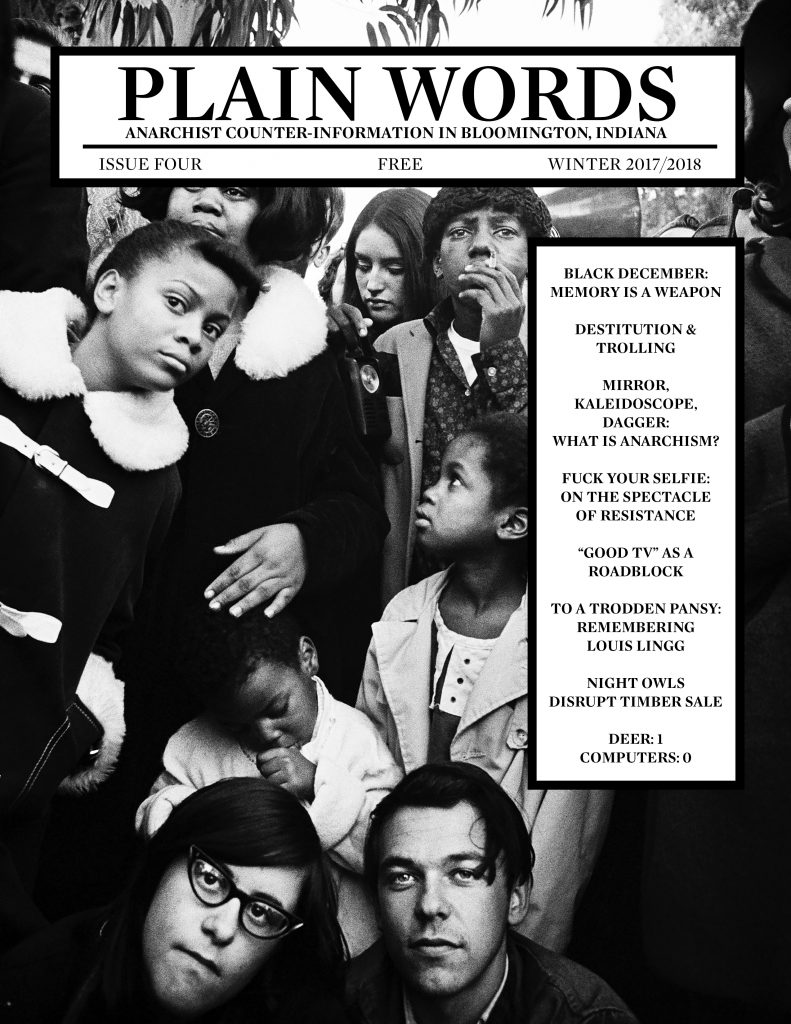 In the grip of modern capitalism we face destitutions both material and social. Precarious employment, debt, exorbitant rent, and a diminishing welfare safety net are complimented by ubiquitous information technology that hinders the development of real life social skills, perpetuating neurotic anxiety and self-loathing which follows perceived failures to meet expected social roles. Both destitutions can be seen as “falling through the cracks,” where people fail to meet society’s norms in achieving a middle-class income, and/or fostering relations of affection, friendship, and love. One can imagine that these destitute people see themselves as losers, and hence gravitate towards opportunities to be in power relations where they are the ones on top, or at least higher than they are now.

In revolutionary times, the collective power inherent in massive and combative struggles may be seductive enough to draw these people in to the anti-politics of liberation. But with no horizon of revolution in sight and the limits of current collective struggles, the destitute will take what they can get. The easiest and most accessible opportunity for power, especially seductive for men with lighter color skin, are the sectors of the internet where far-right trolls specialize in tormenting marginalized people through social media. As the popular adage about bullying goes, the weak become the strong by preying on others that are weak. At the moment, and conceivably in the future, the formula is:

In the past, those who capitalist society shaped to be losers and nerds would rectify their powerlessness by becoming an authority on a commodity or spectacle of their choice. Developing encyclopedic knowledge of video games, music genres, and Star Trek episodes while being condescending to those not in the know replicates a feeling of authority, and instills a fleeting sense of confidence about something, regardless how pathetic. This way of asserting power over others is passive and somewhat harmless, adopted only because it’s within reach.

Contrast this with the typical images of racial hatred in the post-war period: southern brutes drunkenly assaulting civil rights demonstrators, or a horde of working-class whites in the urban north converging on a house newly moved into by a black family to harass and attack them. The aforementioned losers, having too little confidence in themselves and their strength, would likely not be participants in such blatantly confrontational acts.

But different opportunities arise with the internet’s anonymity and everyone being “within reach” due to social networks. Every powerless person who occupies a position of even marginal privilege now has the easy ability to go to 4chan, participate in a coordinated harassment, perhaps of a black celebrity or any visible Trans people, and feel the deranged psychological benefit of asserting power over another. Similarly, men who have been trained to see women as objects, intimidating ones they are incapable of talking to without being creepy, can use social media to lash out in their impotence by tormenting, doxing, and threatening them.

The internet has created an easy pathway for the powerless-yet-privileged to become monsters in a vain reach for power. Who would have thought that hell would be participatory and decentralized?

It was the night after Darren Wilson was acquitted for the murder of Michael Brown, hundreds of people were gathered in the heart of downtown in a medium-sized Midwestern city. After arriving with some comrades, I decided I needed to do something to counter the cold. Walking through the edge of the crowd, I saw not only the usual friends and activists, but faces I didn’t recognize. Some appeared angry and militant, others deeply sad, but the crowd generally seemed confident, and there was a charge in the air that I hadn’t felt at a demonstration in the many years I’d lived there. Years of apathy and tame liberalism had taken their toll on my sense of optimism, but this night I sensed that things were about to change. END_OF_DOCUMENT_TOKEN_TO_BE_REPLACED