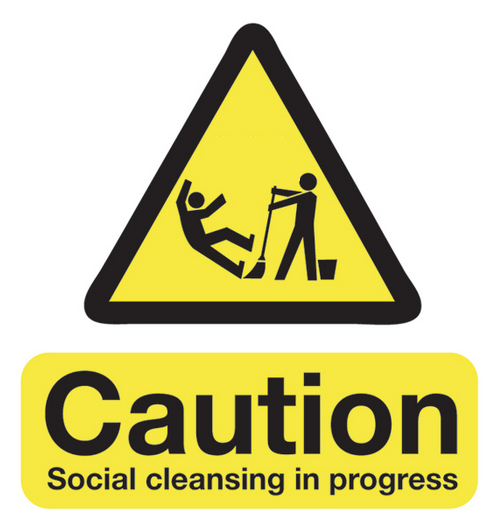 In the last week of June, dozens of houseless people were removed from Peoples Park and numerous other public spaces by the Bloomington Police Department. After evicting people who stayed at the park, the cops began to do roll-call for their officers there, and usually had at least one of their ilk stationed there to make sure houseless people didn’t use the park. This is part of the City of Bloomington’s social cleansing campaign, the appropriately named “Safe and Civil Cities Campaign.”

Eventually multiple houseless people were thrown in jail after police removed people from a public encampment on Kirkwood near the library. In response, around thirty people gathered outside the jail on the corner of 7th and College at 11:00 p.m. on June 29th for an impromptu noise demo. The crowd consisted of many faces beyond the usual suspects at noise demos in recent years. Very few were masked, making it easy for everyone to see who was who, including the State, those watching one of multiple livestreams, and followers of participants on social media.

What set this noise demo apart from others, aside from the large crowd, was the quality of noise-making devices present. The mobile sound system hardly got use, as people banged incessantly on pots and pans, large hippie drums, and even an oil drum. About 30 minutes into the racket, people trapped inside the jail began waving from their cages and signaling by opening and closing window blinds. At this point, a small handful of older fancy types approached us to ask what the commotion was about. Turns out, they were staying in the Hilton across the street from the jail and couldn’t sleep due to all the drum beating and carrying on. (We noted this unexpected positive side effect for possible anti-gentrification efforts in the future.)

At midnight, the crowd moved into the street, blocking all three lanes of College Avenue. It was a Tuesday night in summer, when most students are away, which meant there wasn’t much traffic to block. Only one driver made a futile attempt at passing through and arguing with the demonstrators, but quickly retreated to his car and drove away through a side alley. At this point three BPD turds, including one shiny headed cop-scum with an impressively cocky strut, approached the group and told people to move out of the street. Nobody listened or engaged with these foot soldiers of indignity and ineptitude, and they used their scum mobiles to block traffic for us. Around 12:30 a.m., a few more badge bedazzled pond slime began to convene with zip-ties in tow. The demo turned south and marched towards the square, dispersing soon after that.

This demo was impressive for its size and volume, especially having been called for just a few hours before. We could have done better with messaging, as the few signs present were mostly vague and small. With just a few faces covered, it reiterated the usefulness of handouts about how and why to mask up, even during relatively chill demos. Those whose faces were exposed were also likely documented by the ample livestreamers and other photo and video documentation that was happening. What may seem obvious to many anarchists —that posting photos and videos of demonstrators online only serves to provide the State with more information that can later be used to repress movements —isn’t so for many liberals and progressives. It would be useful for anarchists and everyone else if there was a more concerted continuation of efforts in recent years to disseminate information about safety and security at the demos themselves. Overall, even if it was only symbolic, this noise demo was a surprisingly rowdy response to the city’s efforts to accelerate gentrification by targeting people experiencing homelessness.