This past week, there have been initiatives taken in Bloomington and around the world for the Week of Solidarity with J20 Defendants. The J20 Defendants are 211 people arrested in DC during Trump’s Inauguration on January 20th, who are being charged with at least 8 felonies, including “rioting,” “inciting or urging a riot,” “conspiracy to riot,” and multiple counts of “destruction of property.” If convicted, they face a maximum of 75 years in prison each. The mass arrest took place after the police surrounded the block they were in, using a likely illegal police maneuver called “kettling” to prevent anyone from escaping. In this case as well as countless others, the state casually breaks its own laws whenever they become inconvenient.

On that day and night, hundreds of thousands of people across the country took action, including a rowdy demonstration here in Bloomington. In Washington DC, there was coordinated blockades in a number of intersections in order to stop attendees of the inauguration from arriving, as well as property destruction and widespread disorder. There were some beautiful acts of revolt coming out of DC, including corporate windows and cop cars being smashed in broad daylight, a limo being set on fire, and the iconic punch in the head of a white nationalist celebrity. 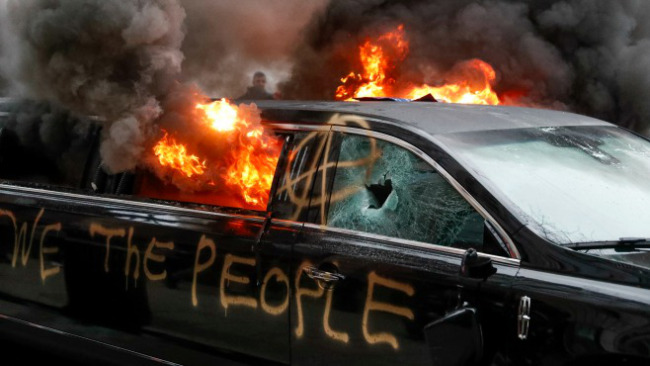 Many of these actions, including the limo burning, took place after the police kettle began, and those that didn’t couldn’t have been committed by more than a handful of people. So charging over 200 people with 8 felonies each is a clear attempt by the state to set a legal precedent allowing for further repression in the future, as well as intimidate those who would dare to revolt. That said, if any of the 211 arrested did break a window, vandalize something, or attack the cops; then all the more reason to support them. The police, the banks, and corporations are extremely powerful institutions that play important roles in perpetuating this nightmare society. If people are willing to risk facing the violence of the state in order to attack these multi-million dollar institutions in broad daylight, then their courage and passion is to be commended.

Some support for the J20 Defendants has been taking place in Bloomington for the last six months since the charges were announced, mostly in the form of informally organized fundraisers. For the Week of Solidarity, a handful of initiatives were organized.

Boxcar Books, a not-for-profit bookstore and community center that hosts space for anarchists and other radicals to have events and meetings, released the following statement in support of the J20 Defendants:

Boxcar Books is a bookstore and community center in Bloomington, Indiana. For 15 years, Boxcar has been a hub for radical literature, underground zines, and alternative publications. It provides space for reading groups, film screenings, organizing meetings, and a reliable location to learn more about, and plug into, an array of political projects, creative endeavors, and service organizations that exist in Bloomington. One of Boxcar’s many missions is to support resistance and radical organizing in Indiana and beyond. We see the case of the J20 defendants as relevant and instructive to all those who dream of a better world, especially those who are going to fight for it. The outcome of these exaggerated charges could either embolden the repressive forces to go after more of us, or it could strengthen our bonds of solidarity and ability to defend ourselves. It is in this spirit that we extend our solidarity and encouragement to all the J20 arrestees, and demand that their charges be dropped and that the arrestees be compensated by the state for all travel expenses, abuse at the hands of the police, lost wages, and emotional distress.

On January 20th we were inspired to find the words, images, and videos of resistance from D.C. We recognize the importance of setting the tone and energy of fighting back as we face the next 4 years under Trump’s regime. We appreciate everyone who showed up and participated in whatever way they could, even with the threat of a heavy presence of police and other fascists. We swelled with pride to see protestors helping each other when pepper sprayed and attacked by the police. It is our responsibility to stand with those who took risks, even now, months later, and for as long as they need our support.

One could be indignant about the absurdity of charging over 200 people with several felonies, but we know better than to appeal to the state for reason or decency. That said, we were surprised by the ambition of the prosecutors and the amount of resources the state is investing. To us, that’s illustrative of how important this precedent is, and how important it is that we don’t back down in the face of it.

Politically-motivated action has historically been met with harsher charges. This serves a purpose. The state has always used fear and intimidation to destroy resistance. Mass arrests, inflated charges, and terrorism enhancements are all part of a wider “divide and conquer” strategy. People who are isolated and exhausted are more easily pacified. Fear breeds in isolation. If the state can convince us that the only way to play is on their terms, then we turn on each other and do their job for them. When we take cooperating plea deals, we neutralize ourselves. If we give in to fear, if one person cooperates and even unknowingly implicates others, it becomes infinitely easier for the state to steal people away.

We have been inspired by the J20 Defendants Points of Unity. With the focus on protecting each other, on not giving in to the illusion of safety in isolation offered by capitalism and cooperating pleas, the defendants stand to gain more power and freedom than they risk losing.

It makes sense to feel afraid. The question is how we deal with that fear – if it brings us together or drives us apart. We have to deal in a way that makes us stronger, not weaker. Together we are more resourceful and better equipped to resist. What does it look like for defendants to grow power together in the face of felonies? It means keeping an eye on the we. If we see ourselves as a thread in the tapestry of resistance, we know that our lives are important, vital, to the structure of the fabric, but we can also refocus on the whole. We are engaged in a fight against fascism, against white supremacy, for autonomy and for freedom. Part of the strategy is to keep us busy, exhausted, and depleted. If, instead, the 211 defendants can not only support each other but build connections and inspire each other in further resistance, then these charges will translate to a sentence for fascism, not for us.

Love and solidarity from Boxcar.

Throughout the week, Boxcar Books has had handbills, fliers, and posters regarding the case sitting on a table at the front of the store during this last week. In the same time frame, a banner was made and has been hanging over the porch facing 6th Street.

The Bloomington Anarchist Black Cross organized an info night for the case that took place at Boxcar Books on Monday, July 24. Two episodes of subMedia’s “Trouble” series were shown, “Bash the Fash” and “No Justice, Just Us”. Before starting the second one, a member of the Bloomington ABC discussed the details of the case in length; shared ways to support J20 defendants including signing on to or writing a statement of solidarity, joining the campaigns for Drop the Charges and early release of the money to investigate the police, fundraising, and signing up for the emerging public newsletter for updates on that case; and distributed literature for flyering and posting.

On Tuesday, January 25, an informal group of friends and comrades organized an information demonstration at People’s Park in downtown Bloomington. Comrades held banners facing Kirkwood and a couple hundred handbills with the J20 statement of solidarity text were passed out to people walking and driving by. Those that passed out the handbills were friendly and went out of their way to talk to people about the case and answer questions anyone had. Somewhat surprisingly, the group only received positive feedback, with people honking, waving, and giving folks thumbs up after reading the statement of solidarity.

The day this reportback is posted, July 27, 2017, the judge in the J20 case is going over a motion filed by some of the defendants to drop all of the charges against them. More information can be found at defendj20resistance.org